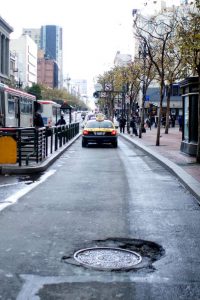 When it comes to solutions to California’s crumbling highway, street and road conditions, it’s easy to feel discouraged about any possible path forward. Fortunately, Gov. Jerry Brown has challenged the Legislature to seek bipartisan solutions to fill the deep hole — make that a big pothole — in what passes for roads and highways in the Golden State.

Special-session public hearings started Thursday, but the real fireworks will start this week when the Legislature returns after the long holiday weekend. How tough is the challenge? Get ready to be depressed:

• We have a $59 billion hole just in deferred maintenance in our state highway system.

• California road conditions rank 45th of 50 states, according to the state Transportation Commission.

When we consider solutions using traditional approaches, we move from being depressed to distressed:

• The gas tax, California’s transportation funding source since 1923, now has the lowest purchasing power, when adjusted for inflation, in history.

• With more Californians driving fuel-efficient cars, we have even fewer gas tax funds to fix our roads.

Fortunately, the governor and the Legislature seem determined to find commonsense solutions to solve these challenges. In the near term, these solutions could include:

• Restoring California’s truck-weight fee to its intended purpose — funding repairs on our highway system caused by heavy-duty trucks. The $1 billion annually raised from these fees is diverted to the general fund. Assembly Democrat Luis Alejo of Salinas and Assembly Republican Eric Linder of Corona (Riverside County) have legislation to ensure the full $1 billion is used as intended.

• State Sen. Jim Beall, D-San Jose, has introduced SB16, which would fund roughly $40 billion in state highway and local road improvements over the next decade.

•• Assemblyman Henry Perea, D-Fresno, has introduced AB1265, which would extend the ability of Caltrans to enter into public-private partnerships, saving time and money on transportation improvements.

• The Silicon Valley Leadership Group is poised to lead or support countywide transportation measures in 2016 in at least three counties: Santa Clara, Santa Cruz and San Francisco. The leadership group co-led the first “self-help” county campaign in 1984, with voters approving a half-cent sales tax in Santa Clara County for specific transportation improvements. The approach has been emulated by 20 counties, and those measures fund 50 cents of every $1 invested in transportation statewide.

San Jose Mayor Sam Liccardo jokes that we could repurpose potholes as “traffic calming devices,” but we all know that crumbling streets are no laughing matter. California has a golden opportunity to turn the corner on the quality of our highways, streets and roads with more adequate, sustainable funding.

The state’s Road Charge Technical Advisory Committee, a 15-member group established by the state Transportation Commission and California State Transportation Agency, is soliciting feedback. You can find out about the public meetings, give input or volunteer to help by going to www.dot.ca.gov/road_charge/.

Carl Guardino is president and CEO of the Silicon Valley Leadership Group. He also is a member of the California Transportation Commission.